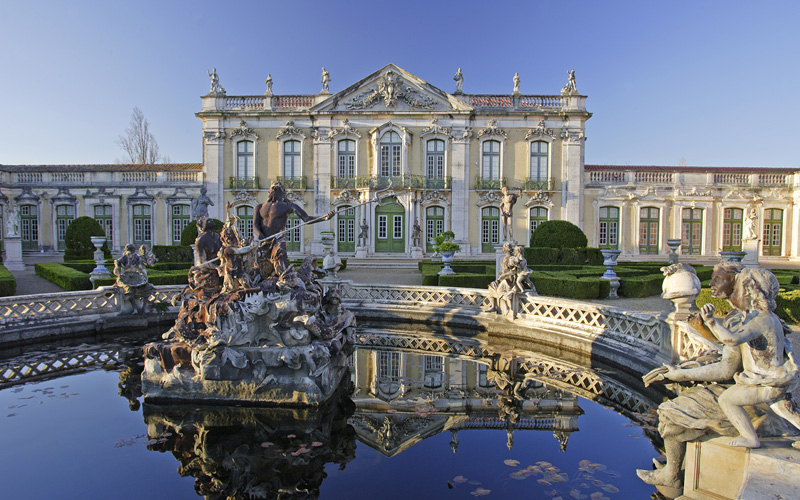 The Royal Palace of Queluz, also known as National Palace of Queluz, dates to the 18th century. The palace was built as a summer retreat for Don Pedro de Bragança, future King Pedro III, and was one of the last large Rococo style buildings erected in Europe.

It was used as a discreet site to imprison Queen Maria I, during her dementia, and especially after the death of King Pedro, in 1786. After fire struck the Palace of Ajuda in 1794, the Palace of Queluz became the official residence of the Portuguese Prince Regent, the future King João VI and his family. And so it remained, until the Royal Family fled to Brazil in 1807, due to the French Invasions.

Construction of the Palace began in 1747, by architect Mateus Vicente de Oliveira. Despite being much smaller, it is often called the "Portuguese Versailles". From 1826 onwards, the palace slowly fell out of favour with Portuguese sovereigns. After a serious fire in 1934, which destroyed the inside of the palace, the monument was extensively restored, and is now open to the public.

One of the wings of the Palace of Queluz, the Queen Maria Pavilion, built between 1785 and 1792 by architect Manuel Caetano de Sousa, is currently an exclusive guest room for foreign heads of state visiting Portugal.

It has been classified as a National Monument since 1910.

Close to Sintra and Lisbon, the National Palace of Queluz and its historic gardens are one of the most notable examples of the harmony between Portuguese landscape and palatial architecture. They illustrate the atmosphere and experiences of the Royal Family and the Portuguese court in the second half of the 18th century and early 19th century, but also shed light on the evolution of taste during this period marked by Baroque, Rococo and Neoclassical style, hearkening back to moments of historical significance during the transition from the Old Regime to Liberalism.

From Castelo Rodrigo to the House of the Infantado

The Palace has its origin in the old Queluz Manor House, ordered erected by the D. Cristóvão de Moura, the first marquis of Castelo Rodrigo, which helped consolidate Portugal and its overseas territories under the Spanish Crown. His son, D. Manuel de Moura (1592-1652), the second marquis of Castelo Rodrigo, transformed the manor into a large recreational estate, which was confiscated after the Restoration of Independence in 1640, and given to prince Pedro, the first the Lord of the House of the Infantado, and future King Pedro II (1648-1706).

The House of the Infantado was created in 1654 by King João IV (1604-1656) with the intent of providing an estate and income to the second-born children of the kings of Portugal, second in line to the Crown.

Prince Francisco (1691-1742), second Lord of the House of the Infantado, was responsible for its expansion and water capture works, including the construction of the aqueduct that survives to this day. However, it was Prince Pedro (1717-1786), the third Lord of the House of the Infantado, and future king consort Pedro III (by marriage to his niece Queen Maria I) who, between 1747 and 1786, promoted a sustained construction effort to expand the so-called "Old Palace", to the scale of a Royal Palace. Uninterested in politics and the intrigues of the court, King Pedro has a considerable fortune and refined taste, dedicating most of his time and effort directly to Queluz, which is only completed after his death.

From Country House to Royal Palace

Initially conceived as a summer residence, it becomes a privileged leisure and entertainment space for the royal family, who permanently set up residence from 1794 until their departure for Brazil in 1807, during the French

invasions. The different green spaces meld with the building, and its façades face the upper "French style" gardens (Pênsil and Malta), extending through the delicate broderie of parterres woven by box hedges. The statues, inspired by classical mythology, adorn and dot the main axes, adding a touch of splendour to these gardens. The remarkable collection of stone and lead sculptures originate from Italy and England, the latter by London artist John Cheere. These gardens are separated from the adjacent gardens, as well as the surrounding forested areas, and agricultural areas, by stone balustrades with vases and statues. The portico radiates out onto a set of connecting avenues which, in turn, are connected to others, forming a complex geometric lattice, with lakes and water features at each vertex. We highlight the lake designed by Frenchman Jean-Baptiste Robillion in 1764, shaped as a starred octagon (Lake of the Medals), among others.

Inside the palace, splendorous settings for devotion and private rooms follow each other in close connection with the outside world, formerly the setting for parties, balls, theatre, concerts, games, and equestrian and firework shows. The refined atmosphere of the Palace's golden age is reflected in the gilded woodcarving and papier mâché works, walls lined with mirrors or paintings, and sparkling chandeliers, of great decorative effect, as well as the heritage on display, most of it from royal collections.

Accessed through the scenic Lion Staircase, the monumental Azulejo Tile Channel is an extensive man-made lake decorated with large Azulejo tiles depicting sea ports and gallant scenes, where members of the Royal Family were able to enjoy gondola rides while they listened to music.

The first phase of construction focused mostly on adapting the old palace, overseen by House of the Infantado architect Mateus Vicente de Oliveira (from c. 1747 to c. 1758), and was followed by a second phase coinciding with the announcement of Prince Pedro's wedding to Princess Maria, the heir to the throne, which took place in 1760. It therefore became necessary to add the appropriate splendour to the new royal residence. The architect and goldsmith Jean-Baptiste Robillion played an important role in the work (from 1760 to 1782), under the supervision of Mateus Vicente de

In 1784, new construction projects were started, under the direction of architect and master-sergeant Manuel Caetano de Sousa (from c. 1784 to 1792). This phase stands out for the changes to the second floor, with new rooms, of which only the main floor over the Ceremonial Façade, and the Queen Maria Pavilion erected on the site of the "Old Opera House”, still stand to this day. Construction was completed in 1789.

Following the destructive fire at the Real Barraca [temporary royal palace] in Ajuda in 1794, the permanent residence of the Royal Family since the 1755 earthquake, the Palace of Queluz becomes the official residence of Queen Maria I – who had become a widow, in the meantime – and later of prince and princess regent João VI and Carlota Joaquina. Some adjustments were made and new buildings constructed to accommodate the Court, Guard and the servants.

Since the palace was first inhabited in the reign of King Pedro III and Queen Maria I, a variety of recreational activities had taken place, partly as the result of the great versatility of the spaces, which were staged and armed for different functions and events, usually the celebration of religious festivities, and royal birthdays.

Queluz is often attended by the Court for serenades, horseback riding, and firework shows, on the occasion of the São João and São Pedro festivities in June, and the birthday of King Pedro III, on the 5 July. Most of the festivities take place in the gardens and include ephemeral architecture, fireworks, equestrian games and bullfights, on horseback and on foot, among other amusements, especially between 1752 and 1786, and music was always centre stage.

Bourbon – arrives in Portugal (1785), the epilogue of simpler times that a succession of tragic events would soon overshadow.

The End of Pomp and the Old Regime [Ancien Régime]

The death of King Pedro III in 1786 will be followed, two years later, by the premature death of crown prince José. This left Queen Maria I a distraught mother, and her inability to rule would eventually be decreed in 1792, the year in which Prince João is acclaimed Prince Regent.

As the Royal Family hastily left for Brazil in 1807, one day before the Napoleonic troops lead by general Junot entered Lisbon, so ended the Palace's period of intense occupation. Great part of the nobility also followed the Royal Family, and many treasures of Portuguese heritage were taken with them, including the contents of the Palace.

In December 1807, Junot himself visits the Palace in order to make some changes, and had even nurtured the dream of installing Napoleon Bonaparte himself at the Palace.

King João VI and the Court returned to Portugal in 1821, but Queluz would only be inhabited again under semi-exile conditions, by Queen Carlota Joaquina, accompanied by her sister-in-law, Princess Maria Francisca Benedita (1746-1829). A wing of the “widow-princess's" quarters was named after her. King Miguel (1802-1866) inhabited the Palace of Queluz during the bloody wars against his brother, King Pedro IV (1798-1834), the first Emperor of Brazil and the first Portuguese constitutional monarch. King Pedro IV would return to Queluz on his deathbed, shortly after the liberal victory, and die of tuberculosis, before his time, in the same room (known as the D. Quixote Room) where he had been born 36 years before his death.

From 1957 onward, the Queen Maria Pavilion – annexed to the Palace's east wing – began housing foreign Heads of State on official visit to Portugal.

Founded in 1979, the Portuguese School of Equestrian Arts is based at the National Palace of Queluz gardens, and aims to promote teaching, practice and dissemination of traditional Portuguese Equestrian Arts. It recovers the tradition of the Picaria Real, the equestrian academy of the Portuguese 18th century court, and exclusively uses Alter Real branded Lusitano horses.

Every Wednesday and Saturday at 11 o'clock, visitors to the Palace Gardens can watch a mounted horse parade at the Portuguese School of Equestrian Art.

The National Palace of Queluz was classified as a national monument in 1910 and is part of the Network of European Royal Residences since 2013.