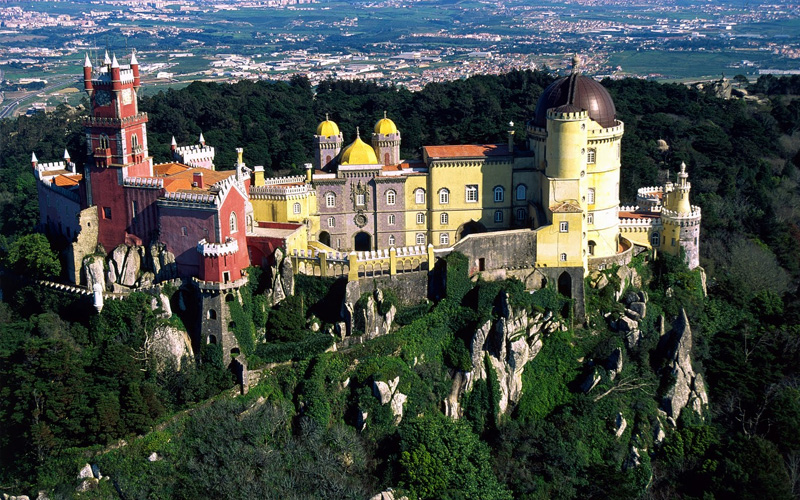 The National Palace of Pena is one of the best expressions of 19th century Romanticism in the world, standing on a craggy outcrop, the second highest point on the Sintra Mountains (exceeded only by Cruz Alta [High Cross] at 528 m above sea level).

The Palace is located in the eastern side of Pena Park, and the steep access ramp built by the Baron of Eschwege can be reached by crossing the Park. The Palace itself has two wings: the former Manueline convent of the Order of St. Jerome, and the wing built in the nineteenth century by King Fernando II. These wings are surrounded by a third architectural structure, which conjures up imaginary patrol paths, merlons and battlements, watch-towers and an access tunnel to a draw bridge.

On 7 July 2007, it was elected one of the seven wonders de Portugal, and is the first romantic palace in Europe, predating the charismatic Schloss Neuschwanstein in Bavaria by approximately 30 years.
The Palace and Park were conceived and implemented as a whole. From the Palace, the visitor can look out over the forest cover spanning the over 200 hectares that make up Pena Park.

This park has beautiful routes and walks, and countless garden constructions. Bridges and caves, garden benches, pergolas and fountains. Small dwellings that housed guards and other servants. Greenhouses and nurseries with camellias, rhododendra and very rare and unusual roses. Sculptures, such as the warrior that can be seen from the Palace, as if on guard.

The lakes near the exit to the Moorish Castle are equally picturesque and pleasant, surrounded by a great corridor of arboreal ferns.

Today, Pena Park is the European park with the richest and most unusual collection of tree species, many of which no longer exist in many of their countries and continents of origin.

In 1838, King Fernando II purchased the ancient convent from the Hieronymite monks of Our Lady of Pena, which had been erected atop the Sintra Mountains in 1511, by order of King Manuel I, and had been empty since 1834, with the extinction of the religious orders. The convent consisted of cloisters and their dependencies, a chapel, sacristy and bell tower, which today make up the northern core of the Palace of Pena, or the Old Palace.

King Fernando began by repairing the old convent, which was in very poor condition, according to sources at the time. He remodelled the entire upper floor, replacing the 14 cells by the larger rooms with vaulted ceilings we see today. Around 1843, the king decided to expand the Palace by adding a new wing (New Palace) with even larger rooms, such as the Main Hall, and a circular tower next to the new kitchens. The work was directed by the Baron of Eschwege.

Restoration work performed in 1994 restored the Palace's original colours: old rose for the old monastery, and ochre for the New Palace.

By transforming an old monastery into a fortified residence, King Fernando revealed the strong influence of German Romanticism, and is likely to have drawn inspiration from the Stolzenfels and Rheinstein castles on the Rhine, as well as the Babelsberg residence in Potsdam. Construction on the National Palace of Pena ended in the mid-1860s, although interior design efforts were later made.

King Fernando also ordered the creation of Pena Park in the areas surrounding the Palace, in the style of romantic gardens, with winding paths, pavilions, and stone seats dotting the routes, as well as trees and other plants from the four corners of the world. Making the most of the humid climate of Sintra’s mountains, an exotic park with over five hundred species of trees was created from the ground up.

The most interesting construction in Pena Park is the Chalet of the Countess of Edla (or House of Delights), located at the westernmost end of Pena Park. It was ordered constructed by King Fernando II and his future second wife, Elise Hensler (Countess of Edla), as a private Summer residence. The chalet is a two-floor building of alpine inspiration, with many scenic elements, in a visual relationship with the Palace.

In 2013 it became part of the Network of European Royal Residences.