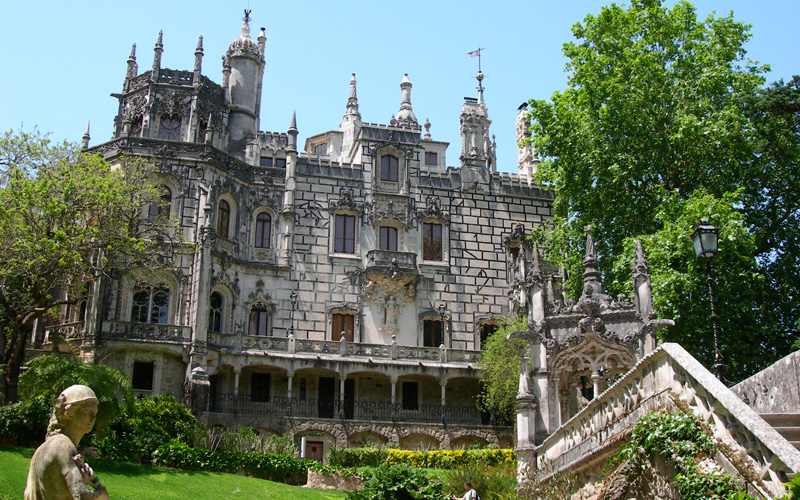 The Regaleira Palace is the largest building in and common name given to Quinta da Regaleira. Also known as "Palace of the Monteiro Millionaire", a reference to the surname of its former owner, António Augusto Carvalho Monteiro.

The house is located on the hillside, a short distance from Sintra’s Historic Centre, and classified as Property in the Public Interest since 2002.

With the aid of Italian architect Luigi Manini, Carvalho Monteiro transformed the 4 hectare estate into a palace surrounded by lush gardens, lakes, caves, and enigmatic constructions, places that hide alchemical meanings such as those evoked by Freemasonry, the Templars, and the Rose-cross. He shapes the space with mixed lines, evoking Romanesque, Gothic, Renaissance and Manueline architecture.

Quinta da Regaleira must be experienced. It is not enough to hear about its memory, landscape and mysteries. You must get to know the estate, contemplate the scenery among the gardens and constructions, admire the Palace, a true philosophical mansion of alchemical inspiration, and walk through the exotic park and feel its spirit.

The Palace of Quinta da Regaleira was ordered constructed in the early decades of the 20th century by Carvalho Monteiro, who commissioned the Italian set designer Luigi Manini with his project. With a neo-Manueline revivalist look, it stands out for its decorative profusion. The leafy gardens, a three-dimensional scenery, are marked by wells, caves, lakes and pavilions that reveal the taste of Carvalho Monteiro, with abundant symbolic allusions, some of them of Masonic origin.

So much so that the inhabitants of Sintra came to refer to this unreal structure as ‘Wedding Cake’, standing not far from the King’s palace. Scenically, nothing like this had been seen before, so no comparisons were possible. It is true that various Romantic palaces such as Monserrate or Pena were works of art themselves, enchanting scholarly and illiterate people alike. However, the new estate of millionaire António Augusto de Carvalho Monteiro was something different. The end result featured several structures decorated in a revivalist style that left nobody indifferent.

To understand a little of the history of Quinta da Regaleira, we have to go back a few centuries, more precisely to the 17th century. The available documentation is scarce. Nonetheless, it is known that José Leite acquired an extensive plot on the outskirts of the town of Sintra in 1697, roughly corresponding to the current limits of the park. A few years later, in 1715, the estate was purchased at public auction by Francisco Alberto de Castro, and was named Quinta da Torre, or Quinta do Castro. The new owner introduced running water to the estate, from a spring on the Sintra Mountains.

In 1830, the estate belonged to Manuel Bernardo Lopes Fernandes and, in 1840, it became the property of Ermelinda Allen, the daughter of a wealthy trader from Porto, later graced with the title of Baroness of Regaleira. According to folklore, Quinta da Regaleira was thus named

because the view from one of the towers in the garden delighted [from the Portuguese regalar] the new owner.

However, Quinta da Regaleira was still far from what it would become at the beginning of the 20th century. In addition to a palace and a chapel, there are a number of other structures that present profuse revivalist decoration saturated with symbolic meaning.

In 1892, then Barons of Regaleira sold the property to the well-known Millionaire Monteiro: António Augusto de Carvalho Monteiro. Born in Rio de Janeiro in 1848, to Portuguese parents, he soon left Brazil for Portugal, where he read Law at the University of Coimbra. Owner of considerable wealth, he acquired the Sintra property to build a very special palace.

Carvalho Monteiro was a very cultured man. An undisputed lover of the national epic, he transposed the main symbols of the Portuguese nation into the decoration of his new palace, hearkening back to golden periods of Lusitanian history, which spanned various centuries. This gesture was manifested in his revivalist taste, featuring Manueline style ornamentation, possibly because this was one of Portugal's main moments of glory, when new paths to other parts of the globe were discovered. At the very least, this was a period which left behind an architectural legacy containing characteristically Portuguese decoration, today termed Manueline because it was created during the reign of the Well-Fortuned King.

Sintra presents itself to the world as a magical crucible, as if somehow different from all known places on earth. Thus, Carvalho Monteiro's project was to be everything but ordinary, inspired as it was by the structural eclecticism of the lofty Pena Palace. He invited one of the best, if not the best set designer of the time to project his dream, the Italian Luigi Manini, who had completed work on the Buçaco Palace Hotel in the Neo-Manueline style. It was Manini himself who designed the plans and built Carvalho Monteiro's work.

Beyond the palace, the architect also worked on the estate's four hectares. He projected the construction of lakes, caves, enigmatic buildings, luxurious gardens, and other spaces heavy with alchemical, Masonic, Templar or even Ross-Cross symbolism. When the Sintra foothills become shrouded in fog, as is often the case, the estate itself becomes shrouded in a dense aura of mystery. The architecture itself was clearly inspired by various architectural models, from the birth of Portugal, with structures evoking Roman and Gothic styles, to Renaissance and Manueline styles, as mentioned above, including Art Nouveau. Construction finished in 1910.

Up to this point, Sintra had witnessed the construction of several residential/palatial structures to be inhabited permanently, during the summer, or simply for other reasons which may be left unexplored in this context. Quinta da Regaleira breaks with the above-mentioned tradition, and makes the most of the magic surrounding Sintra Mountains to create a magical estate, full of indecipherable codes and symbols that challenge visitors and populate their imagination.

Luigi Manini, the set designer asked to draw the new structure, was also working at the São Carlos National Theatre in Lisbon at the time. It is thus not surprising that the scenery at Quinta da Regaleira appears to have come straight out of an opera scene. The set formed by the palace, the chapel, the initiation well, lakes, sculptures, the towers, artificial caves, viewpoints, spaces of assembly, and other enchanting recesses take us to a world far-removed from our day-to-day reality. Everything was conceived and created right down to the smallest detail.

The iconographic richness of each piece of stonework, sometimes encrypted, invites everyone to try and decipher it. The symbols, figures, objects, emblems, cards, shapes and other elements are surprising. Manini's originality makes them exceptional, when viewed as a whole, transforming most of the estate and its garden into an extraordinary opera set.

The richness of the symbology that can be found here is not always accessible to the observer. If, on the one hand, allusions to the Manueline style are easy to identify, other elements related to Dante's hell, or even to Egyptology, are a little harder to identify and lack additional knowledge, often requiring an actual understanding of symbolism and some of its concepts. According to some authors, this vast space, heavy with mysticism and initiation routes, was purposely created for Freemasons.

Despite its mystical aura, it is uncertain if any ritual or anything like a ritual ever took place there. In 1942, the already famous Quinta da Regaleira was bought by millionaire Waldemar D'Orey. Immediately after acquisition, he hired two prominent architects, Luís de Couto and António Lino, to remodel the inside of the palace so as to accommodate his large family, and remove some decorative elements.

Later, in 1988, Waldemar D'Orey's heirs sold the property to the Japanese Aoki Corporation, which kept it closed, and under the guard of a single caretaker. Finally, in 1997, Quinta da Regaleira was acquired by the Sintra City Council, and put under the management of the Cultursintra Foundation. In May 1998, it received the first National Historical Heritage Prize from Ford Portugal.