Countess of Edla Chalet and Gardens 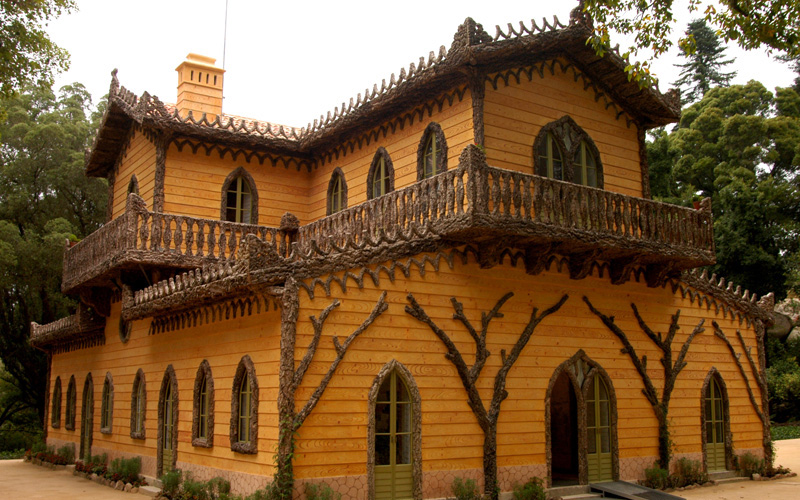 The Countess of Edla Chalet was built by King Fernando II and his second wife, Elise Hensler, Countess of Edla, between 1864 and 1869, modelled after the Alpine Chalets in vogue across Europe at the time.

The building has many scenic elements, is characterized by horizontal markings on the outer plaster, painted in the style of wood planks, and extensively features cork as a decorative element, lining door and window frames, sills, balconies and the tree trunks attached to the façades to support creeping plants.

The Chalet is remarkably located at the opposite end of the park, in relation to the palace, with which it has an important visual relationship, accentuated by the imposing granite blocks locate nearby – the Chalet Rocks – and the valley it overlooks.

The balcony of the Chalet offers a view of the sea, and the Chalet Rocks a view of the Moorish Castle framing the hillside, and of the palace in the distance. The surrounding garden includes viewpoints over the palace and exotic botanical collections from all over the world, such as the arboreal ferns from Australia and New Zealand that are planted in the valley.

In the second half of the 19th century, King Fernando II and his second wife, Elise Hensler, Countess of Edla, created a private Romantic Chalet and Garden in the western end of Pena Park, as a leisurely refuge for the couple.

The eclectic decoration features wall paintings, stucco, azulejo tiles and the extensive use of cork as an ornamental element. Outside, the garden surrounding the Chalet – and Quinta da Pena alike – combines indigenous vegetation and botanical species from the four corners of the world, forming an exotic landscape featuring the Countess' Fern Garden, the Restharrow Garden, the Pergola and the lakes.

The so-called Countess of Edla Chalet was built between 1864 and 1869, and extensive landscaping was performed in the surrounding area. Influenced by the romantic spirit of the time, King Fernando and Elise Hensler, the future Countess of Edla, designed one of the most idyllic and picturesque areas within what is considered the largest and most emblematic Romantic park ever created in Portugal.

The monumental granite stones placed in the garden next to the Chalet, and the views of the valley, the sea, the Pena Palace, the Moorish Castle, and the High Cross accentuate the drama of both the construction and the landscaped setting.

The Garden includes a colourful formal area with camellias, rhododendra, azaleas and exotic landscaping – comprising over two hundred botanical species, recesses, paths, benches and viewpoints – leading from the Chalet to the Pena Palace. Ornamental elements and elements intended to heighten the experience of the garden appear almost unexpectedly along the descent to the Countess' Fern Garden. The valley to the east was the site chosen for the Fern Garden, the first collection of ferns in Pena Park, such as Australian and New Zealand ferns.

Structures belonging to Quinta da Pena can be found adjacent to the Countess' Garden, including pens and tool sheds, new stables, and a space for chariots offering rides across Pena Park.

The Countess of Edla Garden and Chalet was classified as Property in the Public Interest in 1993, and is part of Sintra's Cultural Heritage, classified as a World Heritage Site by UNESCO since 1995.