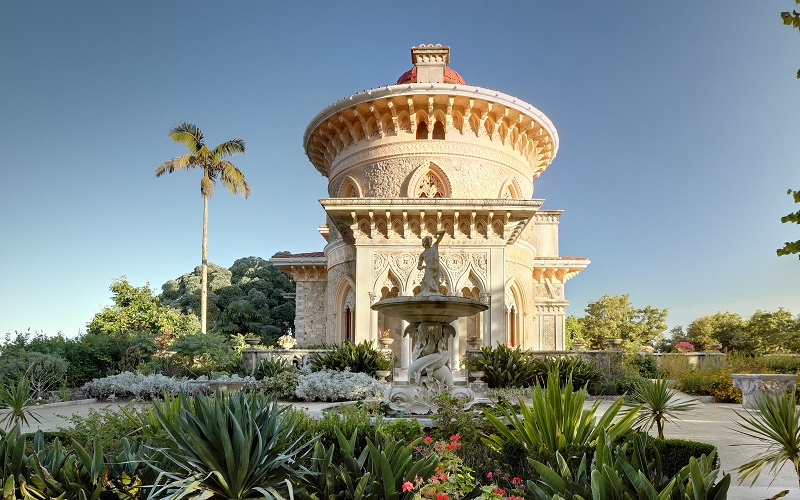 The palace was designed by architects Thomas James Knowles (father and son) and built in 1858, by order of Sir Francis Cook, Viscount of Monserrate. The construction of the gardens exploited the Mountain's microclimate to create a magnificent park, where over 3 000 exotic species can still be seen today.

The palace was the summer residence of the Cook family, and was built on the ruins of the neo-Gothic mansion built by the English merchant Gerard de Visme, the man behind the first Montserrat palace. William Beckford rented the property in 1793, carried out work on the palace, and began creating a landscaped garden.

It is a striking example of Portuguese Romanticism, along with other palaces in the region, such as Pena Palace. It has been classified as a Monument of Public Interest since 1978.
In 1809, the Monserrate Palace was visited by Lord Byron, the anglo-Scottish poet and leading figure of the Romantic Movement.  The sublime aspect of the property was a source of inspiration to the poet in Childe Harold’s Pilgrimage, making this visit a must for foreign travellers, but especially for English travellers, who have described it in numerous travel accounts and captured it in engravings.

Monserrate Palace also appears briefly in the 1996 TV mini-series "Gulliver's Travels''.
Among trees from the four corners of the world, waterfalls and lakes, walks through Monserrate Park are steeped in Romanticism.

The Monserrate Palace and Park are located four kilometres from Sintra's historic centre and stand as testimony to 19th century eclecticism, where exotic and vegetation motifs extend harmoniously indoors. The Palace's front lawn offers visitors some well-deserved rest, while exploring one of the richest botanical gardens in Portugal, and one of the most beautiful examples of landscaping in Portuguese Romanticism.

Quinta de Monserrate was rented by Gerard de Visme (1789), a rich English merchant, who built a neo-Gothic style house on the site. William Beckford sublet Monserrate from 1793-1794. However, when Lord Byron visited the property in 1809, the house was already in ruins.

Francis Cook was also among its famous guests, another very wealthy English industrialist, later graced with the title of Viscount of Monserrate by King Luís, renting the property back in 1856. The effective acquisition of the property took place in 1863, and architect James Knowles began transforming what was left of De Visme's house. Monserrate Palace displays medieval and eastern influences in its decoration. Together with Pena Palace, Monserrate Palace is one of the most important examples of Romantic architecture in Portugal.

The surrounding gardens received species from all over the world, notably Mexico, and are organized by geographical origin, reflecting the diverse origins of the plants, and creating sceneries along the paths through ruins, recesses, lakes and waterfalls.

It is thanks to the contributions of painter William Stockdale and master gardener Francis Burt and, above all, Francis Cook's Romantic spirit, that we can experience Monserrate Palace as it is today. The various gardens offer contrasting sceneries – along winding paths and in harmony with indigenous species (such as strawberry trees, holly, and imposing cork oaks) – with ancestral araucaria and palm trees, arboreal ferns from Australia and New Zealand and agaves and yucca plants from Mexico. This botanical trip across the five continents also includes camellias, azaleas, rhododendron, and bamboo, reminiscent of a Japanese garden.

The Portuguese government bought the property and the palace in 1949. The Monserrate Park and Palace were classified as Property of Public Interest, in 1975, and are part of Sintra's Cultural Landscape, classified as a World Heritage Site by UNESCO since 1995.