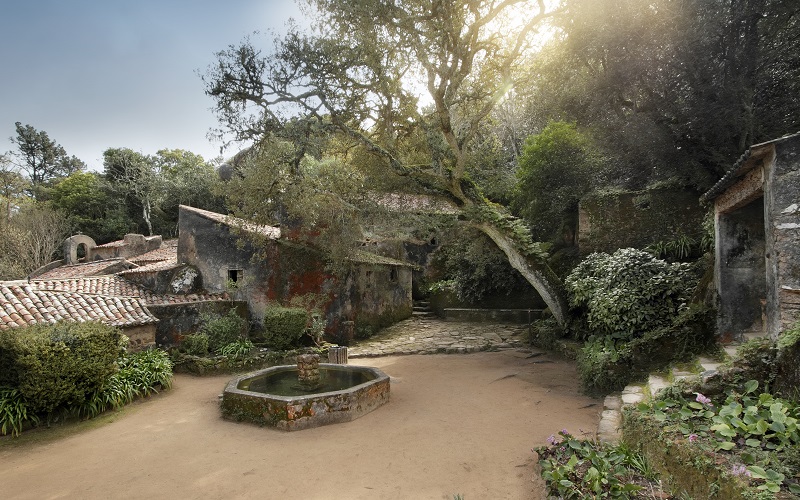 The Capuchos Convent is one of many examples of 16th century Pietistic religiosity in Portugal, and became known for its minimalist construction. During his 1787 account of a visit to the convent, its small size, cells and dormitories lined with cork, and a chapel whose dome is formed out of the rock itself motivated William Beckford to note: "we followed a narrow shortcut over a wild and deserted hill for several miles, to the Capuchos Convent, which at first sight reminds us of Robinson Crusoe's abode." (William Beckford e Portugal. A viagem de uma paixão. Exhibition Catalogue. National Palace of Queluz, 1987, p. 159).

The Convent embodies the ideal of universal fraternity and brotherhood espoused by Franciscan friars. Those who inhabited it belonged to the Arrábida Province of the Order of Friars Minor Capuchin.

The entrance to the convent, a simple portico with a wooden ceiling and beams lined with cork, stands as testament to the minimalist spirit of this construction bereft of decorative elements.

The Capuchos Convent was built in 1560 by order of D. Álvaro de Castro, counsellor of State to King Sebastian and controller of the Treasury, fulfilling a vow made by his father, D. João de Castro, the fourth vice-roy of India.

The Convent of Santa Cruz da Serra de Sintra was thus erected in an isolated and inhospitable setting, undoubtedly chosen for its natural conditions.

The Convent of Santa Cruz dos Capuchos was still inhabited at the end of the 18th century, but by 1834 had already been abandoned, with the extinction of religious orders brought about by the new liberal regime.

Like the remaining monument itself, its artistic pieces have been highly degraded by time, but mostly by acts of vandalism.

However, the convent's rustic nature remains unadulterated by the austerity of its seemingly rupestrian structure. When visiting these buildings, we allow ourselves to walk through its corridors carved into the granite blocks, and become enveloped in the twilight of the friars' day-to-day lives. From the Church, one would move on to the Choir, where chants were sung during Mass. Here, we find the corridor leading to cells, accessed through small doorways, which force us to bow down in humility before the intimacy of this place. The other end of the corridor leads to the refectory, where meals were eaten around a stone table, offered by Cardinal D. Henrique as proof of his admiration for this way of life.


The kitchen can be seen through the revolving serving door, and the Novice Cell is found further ahead. The friars' concern with hygiene and cleanliness is patent in the Water House. The house’s daily life also included tasks carried out in the library and the wards. It is possible to walk through the building, from the guest quarters and ending in the Chapter Room.

The vegetation surrounding the convent is the result of forest management policies devised in the mid-19th century. In the past, the location was much more open and sunny, as can be seen in contemporary engravings from when the friars were present. Outside the convent fence, the land was cultivated and animals shepherded. The woods were limited by rocky terrain and the cliff tops. The convent forest, with its old oak trees and large great bushes certainly benefited from the friars' care. The forest survived to the present day, and is likely the most important example of Sintra's old-growth Mountains. This forest comprises a sub-Mediterranean tree formation dominated by oak trees, with elements of Mediterranean maquis shrubland, and many ferns, mosses, epiphyte plants, and creepers that entangle and envelope everything. Notable isolated specimens cultivated by Man include the leafy plane tree covering the convent yard, the old ash tree in the entrance patio, and some unusually large specimens of boxwood along the paths. Due to their rare nature, state of conservation and the remarkable size of many specimens, this forest is of important natural value and must be safeguarded.