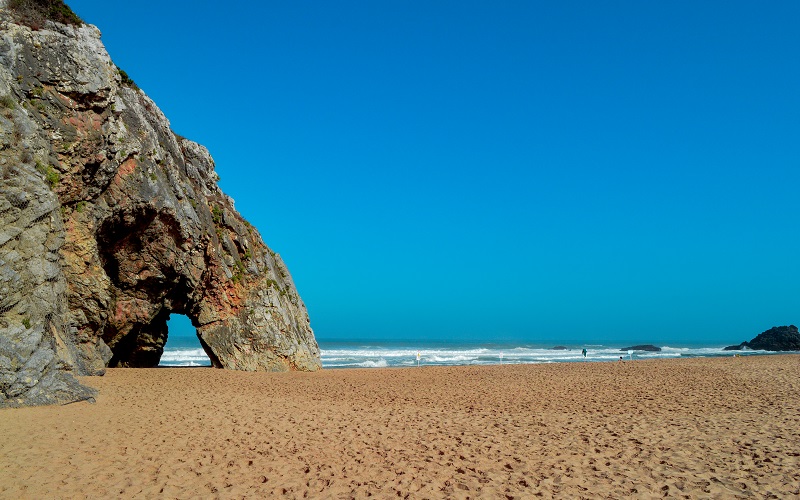 Well-known for its pure waters and easy access to its vast golden sand beach, Adraga Beach is noted for the beauty of the surrounding landscape. Outside of the bathing season, this beach is an inviting place for a walk or a speleological expedition.

Scattered across the sand, there are several dark rocks that give the beach a personality of its own, combining the mountain landscape with the beach landscape. The Alvidrar Stone can be found on the southern escarpment, a huge rock that descends almost vertically toward the sea. According to local tradition, the site was part of an initiation rite for young men to prove their courage, risking their own lives to climb the Alvidrar Stone in both directions.

About fifty meters from the cliff, the Fojo is a must visit site: a very deep natural well that communicates with the sea. The Fojo cave was created by the corrosive action of rainwater, through fractures in the surrounding limestone rocks, combined with the erosive action of the waves, which created a labyrinth of caves and large cracks. The Romans are said to have believed that a Triton played a conch shell at the bottom of the Fojo, which is approximately 90 metres deep. In fact, the noise was likely caused by the waves. However, at the time, a delegation was actually sent to Emperor Tiberius (14 to 34 AD) to report the phenomenon.

In 2019, and for the third consecutive year, Praia da Adraga received the "Golden Quality Beach" distinction awarded by Quercus – Portuguese Association for Nature Conservation. The distinction recognizes the quality of this beach as "excellent".