Rock-climbing is an activity where participants climb a natural or artificial surface, where the use of the upper limbs and appropriate gear is imperative

Find out the characteristics of authorized sites for rock-climbing in Sintra municipality:

Praia da Ursa (Ursa Beach)— includes about 10 traditional rock climbing routes, distributed throughout the granitic cliff face (Rosas, Negras, Cascata/Roses, Black, Waterfall) and the Gaivota limestone crag. The extension of the routes varies from 20 to 30 m. The routes on the granite plaques (sienite) are of medium difficulty, except for the Waterfall sector, which has routes of extreme difficulty.

Restrictions: at the Rosas site from June 1st to September 30th rock climbing is forbidden

Pedra da Noiva (the Bride’s Rock) — a crag almost completely surrounded by sea, located north of Praia da Ursa. It has a traditional climbing route of limestone, with a low level of difficulty and several pitches. On windy days, rappel can be complicated by the wind tunnel that is formed between the rock and land.

Restrictions: climbing is forbidden from January 1st to July 14th

Restrictions: climbing is forbidden from June 1st to September 30th

Encosta dos Bêbados (Drunkard’s Hill)— limestone ridge in the Ribeira das Vinhas valley, with a pronounced negative incline (overhang), with 14 fully equipped routes, ranging from 8 to 12 m and with a high difficulty rating, between 6 and 8.

Lagoa Azul (Blue Lagoon) — a 15m granite crag, with about six routes, situated on private property. With difficult access, through brambles and shrubs, without a well-defined path, the crag is located over and to the West of Lagoa Azul, visible from the road.

Pedras Irmãs (Sister Stones) — granite boulders situated around the Peninha Church and the fountain of the Pedras Irmãs, with an average height of 5 m, which are climbed without a rope, safety measures entailing the use of special portable mats.

Capuchos/Boulders — granite boulders situated near the Convento dos Capuchos, in the pine woods by the Alto das Três Cruzes. With an average height of 3 m they can be climbed without ropes, safety measures entailing the use of special portable mats.

Cruz Alta — granite crag, West facing, located within the Pena Park, slightly below the stretch of road that surrounds the Cruz Alta, of about 25 m with five traditional climbing routes.

Penedo do Monge (Monk’s Boulder) — situated between the Capuchos and the Monge geodesic point. A 15 m granite boulder with a vertical gradient, used for rappel descents, it is equipped with three anchors for protection on the descent.

Penedo da Amizade (Friend's Boulder) — granite wall with about 40 m high, located under the Moorish Castle and facing northwest . Has about 52 routes , with a length ranging between 15 m and 60 m . This climbing school is divided into three sections (1 - Central Sector, 2 - North Boulder, 3 - Moira Damn).

Penedo do Túmulo do Rei (King's Tomb Boulder) — consists of two rocks located below the Moorish Castle, facing the north and the east, with 15 m to 50 m high, with about 12 climbing routes . 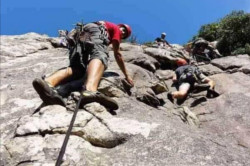 A team of motivated professionals who develop and promote numerous activities in the field of tourism animation.
Rua Marquês Viana, 31
2710-516 Sintra, Portugal
Telephone: (+351) 967 021 248
This email address is being protected from spambots. You need JavaScript enabled to view it.
Website 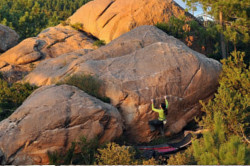 Company managed by a small group of climbers who want to guide climbers to the top cliffs in Sintra.
Rua Sotto Mayor 22,
2710-628 Sintra
Telephone: (+351) 969 482 823
This email address is being protected from spambots. You need JavaScript enabled to view it.
Website